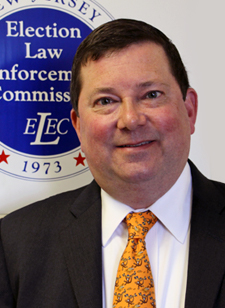 Jaso, a Republican attorney, was nominated on September 8, 2016 by Governor Chris Christie. On July 28, 2017, the Governor named him Chairman. He is the tenth person to serve as chairman.

Jaso is a partner at the law firm of Spiro Harrison in Short Hills. His practice focuses on complex litigation matters, including civil and criminal cases, primarily in the Federal courts.

From 2003 to 2008, Jaso served as an Assistant U.S. Attorney in the U.S. Attorney’s Office in New Jersey. Prior to that, he served as counselor to the Assistant Attorney General of the Criminal Division at the U.S. Department of Justice in Washington, D.C.

In 2011, he was chosen by Republicans to serve on the commission that redrew the boundaries of New Jersey’s U.S. House Districts.

He earned his law degree at the University of Chicago. He received his bachelor’s degree in Government with honors from Harvard.

Jaso lives with his wife and son in Morristown, New Jersey.